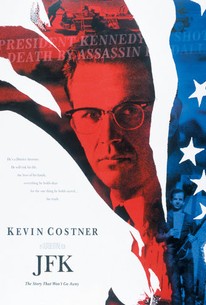 As history, Oliver Stone's JFK is dubious, but as filmmaking it's electric, cramming a ton of information and excitement into its three-hour runtime and making great use of its outstanding cast.

The November 22, 1963, assassination of U.S. President John F. Kennedy shocked the nation and the world. The brisk investigation of that murder conducted under the guidance of Supreme Court Justice Earl Warren distressed many observers, even though subsequent careful investigations have been unable to find much fault with the conclusions his commission drew, the central one of which was that the assassin, Lee Harvey Oswald, acted alone. Instead of satisfying the public, one result of the Warren Commission Report was that an unimaginable number of plausible conspiracy theories were bruited about, and these have supported a sizeable publishing mini-industry ever since. In making this movie, director Oliver Stone had his pick of supposed or real investigative flaws to draw from and has constructed what some reviewers felt was one of the most compelling (and controversial) political detective thrillers ever to emerge from American cinema. Long before filming was completed, Stone was fending off heated accusations of artistic and historical irresponsibility, and these only intensified after the film was released. In the story, New Orleans District Attorney Jim Garrison (Kevin Costner) is convinced that there are some big flaws in the investigation of Oswald (Gary Oldman), and he sets out to recreate the events leading up to the assassination. Along the way, he stumbles across evidence that a great many people had reason to want to see the president killed, and he is convinced that some of them worked in concert to frame Oswald as the killer. Among the suspects are Lyndon Baines Johnson (the next president), the CIA, J. Edgar Hoover, and the Mafia. Over the course of gathering what he believes to be evidence of a conspiracy, Garrison unveils some of the grittier aspects of New Orleans society, focusing on the shady activities of local businessman Clay Shaw (Tommy Lee Jones). Garrison's investigations culminate in his conducting a show trial that he knows he will lose and which he is sure will ruin his career in order to get his evidence into the public record where it can't be buried again. This movie won two of the many Academy Awards for which it was nominated: one for Best Photography (Robert Richardson) and the other for Editing (Joe Hutshing). ~ Clarke Fountain, Rovi

J.J. Johnston
as Mobster with Broussard

William Larsen
as Will Fritz

Eric A. Vicini
as French Reporter

Errol McLendon
as Man with Umbrella

Bruce Gelb
as Board Room Man

Jerry Douglas
as Board Room Man

Ryan MacDonald
as Board Room Man

Duane Grey
as Board Room Man

John Reneau
as A Team Shooter

Stanley White
as B Team Shooter

John Galt
as Lyndon B. Johnson
View All