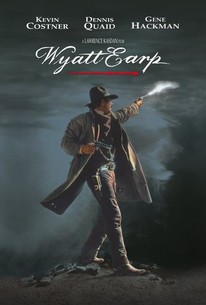 Easy to admire yet difficult to love, Wyatt Earp buries eye-catching direction and an impressive cast in an undisciplined and overlong story.

Directed by Lawrence Kasdan, this epic version of the legendary western sheriff-gunslinger's life story stars Kevin Costner as Earp, who lived from 1848 to 1929. Growing up on a farm in Iowa, Earp tries to run away to join the Union Army in the Civil War, but he is turned away because of his youth. Instead, he studies law and marries Urilla Sutherland (Annabeth Gish). But Urilla dies of typhoid fever before they can have children. Earp grows despondent and descends into drinking and petty thievery, but his father Nicholas (Gene Hackman) finds him, sobers him up, and sets him straight. Earp becomes a buffalo hunter and a close companion of Bat Masterson (Tom Sizemore) and his brother Ed (Bill Pullman). With his brothers, Virgil (Michael Madsen) and Morgan (Linden Ashby), Earp sets out to clean up the violence-plagued towns of the old West -- by using his own guns to settle scores. Earp takes up with Mattie Blaylock (Mare Winningham), a drug addict and prostitute, then discards her for actress Josie Marcus (Joanna Going). In Tombstone, Arizona, the Earp brothers and their comrade Doc Holliday (Dennis Quaid), who is plagued by tuberculosis and a compulsion for gambling, meet their match in a ruthless gang led by Ike Clanton (Jeff Fahey). ~ Michael Betzold, Rovi

Greg Goossen
as Friend of Bullwacker