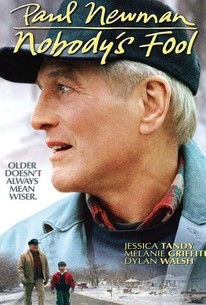 It's solidly directed by Robert Benton and stacked with fine performances from an impressive cast, but above all, Nobody's Fool is a showcase for some of Paul Newman's best late-period work.

Paul Newman earned an Oscar nomination (and won citations from the New York Film Critics Circle and the Berlin International Film Festival) for his performance in this well-drawn comedy-drama. Sully (Newman) is a 60-year-old man who emotionally seems to have never quite emerged from adolescence; scraping by on part-time work in construction, Sully has built a life around avoiding responsibility. He hasn't spoken with his ex-wife (Elizabeth Wilson) in years, he lives in a rooming house owned by his eighth-grade teacher Mrs. Beryl (Jessica Tandy), his best friend is a mildly retarded handyman, Rub (Pruitt Taylor Vince), and he has a crush on Toby (Melanie Griffith), who is half his age and married to Carl (Bruce Willis), who sometimes gives him work. One day, Sully nearly runs into his son Peter (Dylan Walsh) and discovers that he has a grandson he never knew about; for the first time, Sully finds himself thinking that he ought to start behaving like a grown-up -- or at least get to know his family before it's too late. Nobody's Fool also features Gene Saks as Sully's lawyer Wirf, and Philip Seymour Hoffman as the overly-enthusiastic Officer Raymer.

Alexander Goodwin
as Will

Bob Heitman
as Lawyer from Albany

Drenda Spohnholtz
as Girl at the Country Club