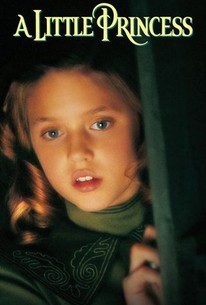 Alfonso Cuarón adapts Frances Hodgson Burnett's novel with a keen sense of magic realism, vividly recreating the world of childhood as seen through the characters.

A privileged, free-spirited young girl tries to adapt to life in a strict boarding school in this charming, critically acclaimed children's fantasy. Adapting a novel by Frances Hodgson Burnett, also the author of The Secret Garden, the film shifts the story's setting to World War I. 10 year-old Sara Crewe (Liesel Matthews) has been left in a respected New York City boarding school while her British father heads overseas to fight. Filled with wild stories and a playful attitude, the unconventional Sara becomes popular amongst her classmates but quickly comes into conflict with the harsh headmistress, Miss Minchin (Eleanor Bron), who attempts to quash the child's individuality. The young girl's situation takes a serious turn for the worse when she unexpectedly receives word of her father's death, and, suddenly impoverished, is forced into life as a servant. Treated as a lesser class of person by her former companions, Sara instead befriends her fellow servants and turns to the power of imagination in order to maintain hope for the future. In addition to changing the story's setting, screenwriters Richard LaGravenese and Elizabeth Chandler add a layer of Indian mythology to the tale, allowing director Alfonso Cuaron the chance to punctuate the riches-to-rags fable with a series of lush, imaginative fantasy sequences. Though A Little Princess had difficulty attracting audiences during its initial run, its visual splendor and touching storytelling were praised by many critics, several of whom proclaimed the film one of the best family-oriented productions of its time. ~ Judd Blaise, Rovi

Nathaniel Merrill
as Doctor in Hospital

Tim Winters
as Frances the Milkman

Norman Merrill
as Doctor in Hospital

Peggy Miley
as Mabel the Cook

Chris Ellis
as Policeman
View All

Critic Reviews for A Little Princess

Audience Reviews for A Little Princess