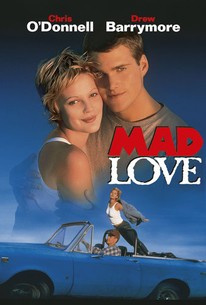 Mad Love tries to juggle mental illness with meet-cute, and the end result is a misguided rom-com whose sparks resolutely fail to fly.

A lonely teenager thinks that he's found love, but it turns out to be more than he bargained for. Matt Leland (Chris O'Donnell) is an intelligent but awkward high school student who is in the market for a girlfriend but not having much luck finding one. One night, while looking at the stars through his telescope, Matt accidentally trains his vision on Casey Roberts (Drew Barrymore), a high-spirited girl who lives on the other side of the lake near their home. Matt is smitten with her, and he maps out a scheme to meet her. He finds her brash and charming, and she seems just as fond of him. However, Matt doesn't know that Casey is manic depressive and has been in and out of mental institutions for most of her life. Her father Richard (Jude Ciccolella) wants to keep her in an institution, while her mother Margaret (Joan Allen) wants the best for her daughter but isn't sure what that is. Casey, however, wants to be with Matt, and she convinces him that her parents mean to harm her. They run away, planning to go to Mexico, but Matt begins to realize that Casey's mood swings are more serious than he imagined. Set in Seattle, Mad Love features an on-screen appearance by the Washington-based all-female hard rock band 7 Year Bitch; the soundtrack also features music by Nirvana, Luscious Jackson, Los Lobos, Cracker, and Grant Lee Buffalo.

Pedro Garcia
as Mechanic
View All