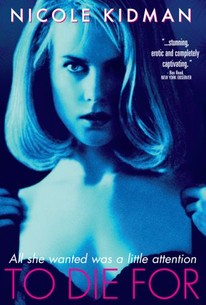 Smart, funny, and thoroughly well-cast, To Die For takes a sharp - and sadly prescient - stab at dissecting America's obsession with celebrity.

To Die For Ratings & Reviews Explanation

To Die For Photos

The price of fame is murder -- or at least it is in the mind of one woman in New Hampshire. Suzanne Stone (Nicole Kidman) has spent most of her life wanting to be famous; she's attractive, speaks well, and imagines herself to be intelligent ("imagines" is the key word here), so she has set her sights on becoming a TV anchorwoman. However, opportunities for female broadcasters are hard to come by in Little Hope, New Hampshire, and she's convinced that her husband, the once handsome but now flabby restaurant manager Larry Maretto (Matt Dillon), is just getting in her way. Suzanne gets herself a spot hosting a weather report on a local public access station, and is preparing a documentary called "Teens Speak Out," which puts her in touch with a trio of high school students -- Jimmy (Joaquin Phoenix), Russell (Casey Affleck), and Lydia (Alison Folland) -- who are even more desperate for attention than she is. When Suzanne hatches a plot to get Larry out of her life once and for all, she uses Jimmy, who has developed a serious crush on her, to do her dirty work, but Larry's sister Janice (Illeana Douglas), who has long believed there was something fishy about Suzanne, eventually begins to realize what happened to her brother. Nicole Kidman won a Golden Globe award for her work in this film, which represented something of a comeback for director Gus Van Sant after the commercial and critical disaster of Even Cowgirls Get the Blues. Screenwriter Buck Henry plays a small role as a high school teacher. ~ Mark Deming, Rovi

David Cronenberg
as Man at Lake

Amber-Lee Campbell
as Suzanne at Five

Tamara Gorski
as Girl at Bar

Katie Griffin
as Girl at Bar

Carla Renee
as Girl at Bar
View All

News & Interviews for To Die For

Critic Reviews for To Die For

Audience Reviews for To Die For

To Die For Quotes