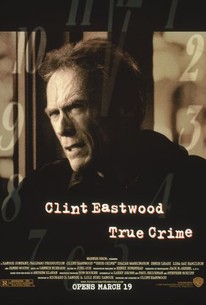 True Crime has the potential for a gripping character-driven mystery, but a pedestrian story and a miscast Clint Eastwood undermine its effectiveness.

Steve Everett is an investigative reporter with a lot of problems. An alcoholic, he's only been sober for two months. An unrelenting womanizer, he's on the verge of being thrown out by his wife, Barbara. Thanks to his messy personal life, he was fired from the New York Times. He has since relocated to the West Coast and The Oakland Tribune. The move to the West Coast and the last-chance job haven't really influenced Everett's style much, which is infuriating to the Tribune's stiff-necked city editor, Bob Findley. Furthermore, Everett's unorthodox conduct has personal consequences for Findley. In fact, when Findley wants to send Everett on a particular assignment, the editor calls home and asks his own wife, who is in bed with Everett at the time, to please put Everett on the phone. Findley has made the call because another reporter, covering the impending San Quentin execution of convicted murderer Frank Beachum, has been killed in an automobile accident. The final interview with the condemned man has, therefore, been handed to Everett, who reluctantly begins to do a little research on the case, anticipating a routine story....Steve Everett, harried, hassled and trying not to self-destruct, has less than 12 hours to save the life of a man he knows is innocent.