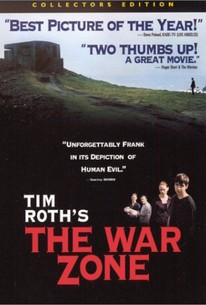 With the well-acted The War Zone, debuting director Tim Roth finds moments of beauty in a tale of stark horror -- and marks himself as a talent to watch behind the camera.

The molten emotional power that flows from Tim Roth's directorial debut carries multiple messages that sear one's soul. Yet it also faithfully portrays one of the harshest aspects of the relationship between children and parents. Based on an acclaimed novel by Alexander Stuart, The War Zone is an often-troubling exposition on family dynamics and the dysfunction that bubbles beneath the surface. Award winning actors Ray Winstone and Tilda Swinton, along with complete newcomers Lara Belmont and Freddie Cunliffe, give such incredibly deep and intense performances that one is definitely riveted (almost painfully so) to the screen. The family has just resettled in the Devon countryside from London, and fifteen-year-old Tom is bored and lonely, while his eighteen-year-old sister, Jessie, seems much more comfortable in the new surroundings. When "mum" gives birth to the family's third child, despite a near-tragic car accident on the way to the hospital, all appears to be well. But this happy event is shattered when Tom stumbles upon a horrific scene, and in short order the appearance of normality is unmasked, and any semblance of trust and kinship is threatened. Director Roth designs an inexorably desperate drama that questions the very fabric of family life even as it eschews pat explanations or psychological reduction. With an extraordinary feel for the banality of real-life evil and an almost-claustrophobic jolt of narrative truth, The War Zone stays with you long after you have left the theatre.

Annabelle Apsion
as Nurse
View All

Critic Reviews for The War Zone

Audience Reviews for The War Zone