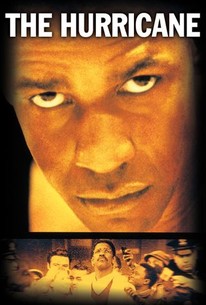 Thanks in large part to one of Denzel Washington's most powerful on-screen performances, The Hurricane is a moving, inspirational sports drama, even if it takes few risks in telling its story.

In 1966, Rubin "Hurricane" Carter was a top-ranked middleweight boxer whom many fight fans expected to become world champion. When three people were shot to death in a bar in Paterson, New Jersey, Carter and his friend John Artis, driving home from another club in Paterson, were stopped and questioned by police. Although the police asserted that Carter and Artis "were never suspects," a man named Alfred Bello, himself a suspect in the killings, claimed that Carter and Artis were present at the time of the murders. On the basis of Bello's testimony, Carter and Artis were convicted of murder, and Carter was given three consecutive life sentences. Throughout the trial, Carter proclaimed his innocence, saying that his African-American race and work as a civil rights activist were the real reasons for his conviction. In 1974, Bello and Arthur Bradley, who also claimed that Carter was present at the scene of the crimes, recanted their testimony, but Carter and Artis were reconvicted. In the early 1980s, Brooklyn teenager Lesra Martin worked with a trio of Canadian activists to push the State of New Jersey to reinvestigate Carter's case; in 1985, a Federal District Court ruled that the prosecution in Carter's second trial committed "grave constitutional violations" and that his conviction was based on racism rather than facts. Carter was finally freed, and he summed up his story by saying, "Hate got me into this place, love got me out." The Hurricane is based on Carter's incredible true story and stars Denzel Washington as Carter, Vicellous Shannon as Lesra Martin, and John Hannah, Liev Schreiber and Deborah Unger as the Canadian activists. Veteran filmmaker Norman Jewison directed. ~ Mark Deming, Rovi

John A. MacKay
as Man at Falls

Donnique Privott
as Boy at the Falls

Tonye Patano
as Woman at Prison

Phillip Jarrett
as Soldier No. 1 in U.S.O. Club

Kenneth McGregor
as Detective at Hospital

Scott Gibson
as Reporter at Banquet

Peter Graham
as Prisoner With Camera

News & Interviews for The Hurricane

Critic Reviews for The Hurricane

Audience Reviews for The Hurricane