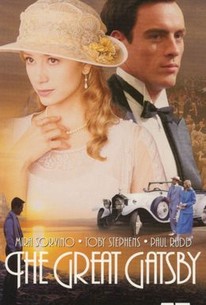 F. Scott Fitzgerald's masterpiece, often regarded as one of the greatest American novels of the 20th century, is brought to the screen in this made-for-TV feature, produced in collaboration with the A&E Cable Network in the United States, and Granada Entertainment in Great Britain. Nick Carraway (Paul Rudd) is a young bond salesman who rents a cottage near the mansion of the wealthy but reclusive Jay Gatsby (Toby Stephens). In time, Nick gets to know his neighbor, who has accumulated a vast fortune through vague, suspect means, but has carefully forged an outward image of refinement and charm. Years ago, before he left to fight in World War I, Gatsby was a poor man named Gatz and was in love with a beautiful woman from a wealthy family, Daisy (Mira Sorvino). When he returned, Gatz was determined to remake himself so that he might be seen fit to someday win her hand, even though Daisy had by this time married the socially prominent but boorish Tom Buchanan (Martin Donovan). Gatsby has yet to give up on his romantic dream and enlists Nick, who is distantly related to Daisy, in his plan. This production marked the fourth time that The Great Gatsby had been committed to film -- the best known version being Jack Clayton's 1974 adaptation, featuring Robert Redford as Gatsby and Mia Farrow as Daisy. ~ Mark Deming, Rovi

Critic Reviews for The Great Gatsby

Audience Reviews for The Great Gatsby