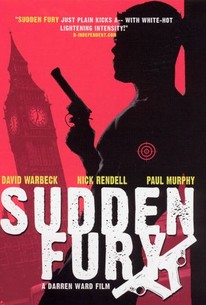 An ambitious small time crime boss hatches a bloody scheme to break big in director Darren Ward's violent tale of crime and betrayal in the criminal underworld. Randall (Paul Murphy) is a deadly criminal mastermind of the most dangerous kind. Ruthless, untrustworthy, and violent, this cold-blooded killer has set his sights on the lucrative drug-smuggling empire of his notorious nemesis Harris - and he won't stop until he becomes the sole cocaine distributor for the entire South Coast of England. When Randall enlists the aid of legendary hit-man Walker (Nick Rendell) to take out his untouchable rival, the sole obstacle between Randall and ultimate power is finally removed. Upon discovering that Randall had never intended to pay him for his work in the first place, the skilled Walker must use every trick in the book to get past Randall's thuggish cronies and take brutal revenge on the devious crime-boss-turned-drug-lord.

There are no critic reviews yet for Sudden Fury. Keep checking Rotten Tomatoes for updates!

There are no featured audience reviews for Sudden Fury at this time.