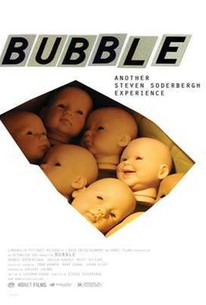 This rigorously stripped down, seemingly mundane little film still manages to be engrossing and creepy.

Steven Soderbergh followed up his slick, star-studded sequel, Ocean's Twelve, with Bubble, a small-town drama about workers in a doll factory, played by a cast of unknowns. Martha (Debbie Doebereiner) seems to have acclimated herself to a very simple life. She works at the factory, where she eats lunch with a younger co-worker, Kyle (Dustin Ashley), and goes home to take care of her elderly father. Her routine is disrupted when an attractive young woman, Rose (Misty Wilkins), is hired at the factory to help them with the holiday rush. Rose soon tells the others that she's eager to leave their town, where there is "nothing to do." She immediately attracts Kyle's attention. One night, Rose asks Martha to baby-sit for her two-year-old daughter while she goes out on a date. Martha is startled to learn that her date is with Kyle. When Rose returns home that night, she's greeted by her angry ex-boyfriend, Jake (K. Smith), who accuses her of stealing from him. Martha looks on while Rose and Jake have a heated confrontation. The next morning, one of the characters is found murdered, and a detective (played by Decker Moody) begins to investigate. Bubble was written by Coleman Hough, who also scripted Soderbergh's Full Frontal. It was shown at the 2005 New York Film Festival, presented by the Film Society of Lincoln Center. ~ Josh Ralske, Rovi

A. Paul Brooks Jr.
as Doctor