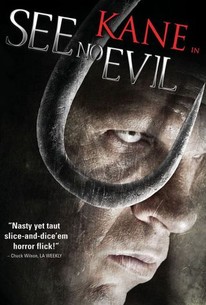 See No Evil is packed with cliches from countless other teen slasher films, making for a predictable, scare-free waste of time.

A ragtag group of juvenile delinquents assigned the task of cleaning up an abandoned hotel find out just how deadly community service can be when they are stalked by a monstrous, four-hundred-pound maniac with a grudge in director Gregory Dark's wrestling-infused survival horror flick. It was a mere four years ago that seven-foot menace Jacob Goodnight (WWE superstar Kane) was shot in the head and left for dead by a local police officer. But Jacob wasn't going down that easy. With a steel plate subsequently attached to his skull and ten razor-sharp fingernails ready to scrape grey matter from the skulls of his victims, Jacob retreated to the abandoned Blackwell Hotel, where he resided in the darkened, rotting hallways while planning his ultimate revenge. As fate would have it, Jacob wouldn't have to go far to satiate his raging bloodlust, though, and as the unsuspecting teens make their way through the crumbling corridors of the once-luxurious inn guided by the very same policeman who fired that misguided bullet years earlier, the notorious killer sharpens his nails, stalks his prey, and prepares for a little payback. ~ Jason Buchanan, Rovi

Tim McDonald
as Officer No. 1

Trent Huen
as Officer No. 2

Matthew Okine
as Officer No. 3

Mikael Wilder
as Russell
View All

News & Interviews for See No Evil

Critic Reviews for See No Evil

Audience Reviews for See No Evil