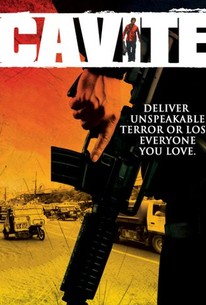 A gritty, low-budget thriller, Cavite takes us on a heart-pounding ride through the seedy Filipino underworld.

A young man unwillingly becomes embroiled in a terrorist plot in Cavite, a low-budget digital video project from Filipino-American co-writers/co-directors Ian Gamazon and Neill Dela Llana. The film, shot with a jittery hand-held camera that is almost constantly in motion, opens with a panic-stricken man bringing a bomb onto a Manila bus, then cuts to San Diego, where Adam (Gamazon) is working nights as a security guard and seems to be wasting his life away before he gets a call from his mother in the Philippines, telling him he needs to come home. He's sent off by a protracted transcontinental telephone argument with his American girlfriend, but things get much worse for Adam when he lands in Manila. His mother doesn't arrive to pick him up, and he soon discovers that someone has slipped a package containing a cell phone into his backpack. The phone rings, he picks it up, and his life is changed forever. On the other end of the line, a sinister voice tells Adam that his mother and sister are being held hostage, that his every move is being watched, and that if he doesn't do exactly as the voice tells him, his family will be killed. As he's led on a grisly tour of the impoverished Cavite region, Adam, a lapsed Muslim, soon realizes that his tormentor is a member of the notorious Abu Sayyaf terrorist group, which is fighting the Philippine government to get Muslim control of the southern section of the country. While sending him through his mysterious "assignment," the caller mocks Adam for his American ways, and his lack of awareness of his own culture. Cavite was selected by the Film Society of Lincoln Center and the Museum of Modern Art for inclusion in New Directors/New Films in 2006. ~ Josh Ralske, Rovi