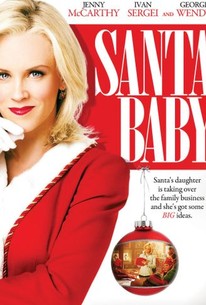 When Santa's estranged daughter Mary learns that her typically jovial father has fallen too ill to finalize his Christmas plans for the year, she sets her sights on the North Pole and hatches a plan to update her father's outdated system in this family friendly holiday comedy directed by Ron Underwood (City Slickers) and starring Jenny McCarthy, Kandyse McClure, and Michael Moriarty. Depressed that her ideas for the holidays were perpetually dismissed, Arctic entrepreneur Mary Clause (McCarthy) leaves her family behind in order to seek her fortune in New York City. Years later, Mary receives word that Father Christmas (George Wendt) is too ill to travel, and seizes the opportunity to finally give dad's antiquarian system a complete overhaul. But in order to truly prove her mettle, Mary will not only have to reconcile her relationship with her father, but with her former boyfriend Luke (Ivan Sergei) as well. In the meantime, Mary's current beau (Tobias Mehler) hatches a plan to turn his girl's home into a tacky holiday mall and the elves panic at the thought of not having everything in place for the big night.

Gabe Khouth
as Skip the Elf

James Higuchi
as Dave the Elf

Richard Side
as Gary the Elf