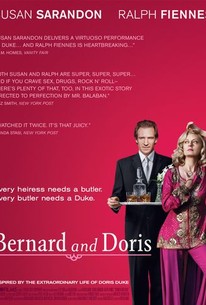 Director Bob Balaban's fictional drama presents a speculative exploration of the relationship shared between wealthy tobacco heiress Doris Duke (Susan Sarandon) and her Irish butler Bernard Lafferty (Ralph Finnes) who, after just six years working as Duke's servant, was posthumously awarded complete control of his former boss' multi-million dollar fortune. Serendipitously showing up on Duke's doorstep just after the temperamental grand dame has dismissed her previous butler, Lafferty immediately lands a job tending to her vast estate. Penniless and openly homosexual, Lafferty immediately began to ingratiate himself into every area of his new boss' life. And while outward appearances would suggest that the two had little in common, the butler's unwavering loyalty continually found Duke seeking his judgment despite frequent warnings from her friends and closest advisers. Later, when Duke died, her friends, family, and lawyers were shocked to discover that she had left Lafferty the lion's share of her vast fortune. While few but Duke and Lafferty will ever know what truly went on behind closed doors, Balaban and screenwriter Hugh Costello use the facts of their relationship as a springboard to exploring the bond between the woman who had it all, and the man who eventually inherited it from her. ~ Jason Buchanan, Rovi

Critic Reviews for Bernard and Doris

Audience Reviews for Bernard and Doris