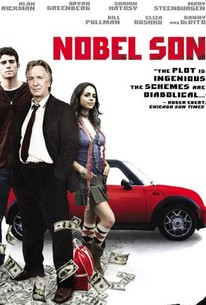 Despite the best efforts of a strong cast, Nobel Son is over-plotted and self-consciously odd.

A young man's moment of triumph is spoiled when he gets kidnapped before he can impress his father in this black comedy. Eli Michaelson (Alan Rickman), a well-respected scientist, has learned that he's won the Nobel Prize in chemistry, which is a mixed blessing for his friends and family; while Eli's ego is a bit strong under the best of circumstances, this affirmation of his talent and intelligence has made him insufferable. Eli's wife, Sarah (Mary Steenburgen), a talented forensic psychiatrist, is more than annoyed by Eli's fondness for extramarital affairs (and lack of concern about hiding them), while his son, Barkley (Bryan Greenberg), has spent much of his life struggling to live up to his dad's expectations, with little success. Barkley is about to receive his Ph.D, just in time for his father's prize ceremony, when he's abducted by a pair of hapless crooks. The kidnappers demand Eli's two-million-dollar Nobel honorarium in exchange for Barkley's safe return. Also starring Bill Pullman, Danny DeVito, Eliza Dushku, and Shawn Hatosy, Nobel Son received its world premiere at the 2007 Tribeca Film Festival. ~ Mark Deming, Rovi

Kevin West
as Jaundice
View All