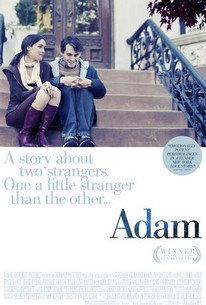 In movies, when two twentysomethings serendipitously wind up under the same Manhattan roof, witty repartee usually transpires, then sparks fly, and eventually they fall into bed. But the boy and the girl in Adam are no ordinary characters, and their romance is anything but familiar. Soon after moving in, Beth, a brainy, beautiful writer, encounters Adam, the handsome, but odd, fellow in the downstairs apartment. A pleasant chemistry flows, but his awkwardness is perplexing. Whether avoiding eye contact or standing by blithely while Beth drags a heavy load up steep stairs, Adam seems utterly oblivious to social convention. Then one night, Adam regales Beth with an elaborate outer-space light show. It's a magical moment, tainted slightly by his obsessively thorough astronomical explanation. Their connection is palpable. It becomes clear that Adam's inability to decipher nonverbal signals is beyond his control. And yet Beth doesn't balk. Their mutual interest tentatively takes root.What makes this rare story about obstacles to human intimacy credible is its tremendous psychological wisdom; what makes it transcendent is the intelligence and authenticity radiating from actors Hugh Dancy and Rose Byrne. Though their particular challenges are extraordinary, Beth and Adam's tricky relationship elucidates something universal: truly reaching another person means bravely stretching into discomfiting territory-and the shake-up can be liberating.

Hunter Reid
as Child
View All