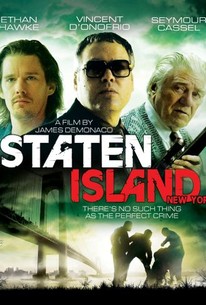 The lives of a septic tank cleaner, an ambitious mob boss, and a deaf-mute deli worker converge in tragedy in this seriocomic crime drama from director/screenwriter James DeMonaco. Blue collar by birth, Sully Halverson (Ethan Hawke) has never amounted to much in life. When Sully finds out he's about to become a father, he schemes to rob Parmie Tarzo (Vincent D'Onifrio), a small-time kingpin who's looking for a way to leave his mark on the world. By saving Staten Island Forest, Parmie surmises, he can mold an upstanding public persona for himself while quietly eliminating the competition behind closed doors. That's where Jasper Sabiano (Seymour Cassel) comes in. Seymour may not be able to hear or speak, but he's a hard worker who knows where his bread is buttered. When he's not serving up bagels and coffee, Jasper is dispatching bodies for Tarzo -- frequently in Staten Island Forest. But lately Jasper has been growing tired of the game, and he's desperate to find a way out. When Sully sets his plan into motion, all three men find themselves thrust into a volatile situation that threatens to destroy their plans for the future as it quickly spirals out of control. ~ Jason Buchanan, Rovi

Bill Cwikowski
as Manny the Cashier

Dennis Albanese
as Wiseguy
View All