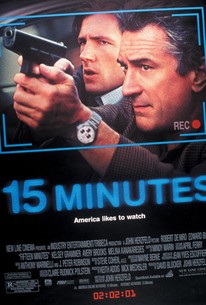 As critical as it is about sensationalism in the media, 15 Minutes itself indulges in lurid violence, and its satire is too heavy-handed to be effective.

An action drama centering on the media circus, 15 Minutes focuses on a New York homicide detective named Eddie Flemming (Robert De Niro), a famous figure known for his heroic on-the-job manner. A tabloid news anchor (Kelsey Grammer) attempts to get the scoop on Flemming's latest beat when a pair of Eastern European criminals (Karel Roden and Oleg Taktarov) find a way to manipulate the media by filming their exploits, which they believe they can sell to bloodthirsty journalists and make themselves rich. In the wake of a double murder, Flemming teams up with Jordy Warsaw (Edward Burns), an arson investigator assigned to help locate the murderous pair. Meanwhile, Flemming must contend with his news reporter girlfriend Nicolette (Melina Kanakaredes) as he and Jordy find themselves enveloped in a lurid series of events that threatens to jeopardize their safety. Kim Cattrall, Avery Brooks, and Vera Farmiga are also featured in the cast.

Bruce Cutler
as Himself

Roseanne Barr
as Herself

Kata Dobó
as Redhead at Ludwig's

Peter Arnett
as Himself