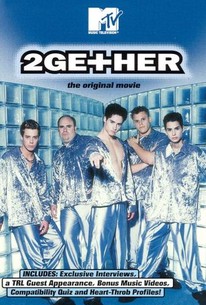 MTV's first made-for-TV movie, 2Gether: The Original Movie, is a hilarious and sometimes touching send-up of the "boy band" phenomenon of the '90s. When rock manager Bob Buss (Alan Blumenfeld) is fired by the studio-created boy group Whoa!, he decides to get even by creating another band from the ground up. After discovering young Jerry O'Keefe (Evan Farmer) singing in the streets, Buss builds his new group around O'Keefe's natural talents. Adhering to the standard music-industry clichés, Buss' pre-fab creation, 2gether, consists of "The Lead Singer" (O'Keefe), "The Bad Boy" Mickey Parke, "The Cute One" Q.T. McKnight, "The Shy One" Chad Linus, and "The Older Brother," who happens to be Chad's older brother Doug Linus. Whipping them into shape in but a few days, Buss prepares 2gether for their big-time debut in Jacksonville -- as the opening act for Whoa! Several MTV personalities, notably the ubiquitous Carson Daly, appear as themselves. In true "life imitates art" fashion, 2gether briefly became an honest-to-goodness pop sensation, turning out several popular tunes, a well-circulated music video, and a weekly TV series. Filmed in Vancouver, 2gether: The Original Movie first aired on February 1, 2000.

Carson Daly
as Himself

There are no critic reviews yet for 2Gether. Keep checking Rotten Tomatoes for updates!

There are no featured audience reviews for 2Gether at this time.