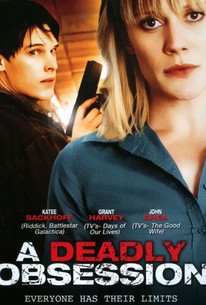 A popular Psychology professor at a prestigious East Coast college must face the demons of her distant family past when confronted by a disgruntled former student who has taken her classroom hostage. Suzanne Hollander (Katie Sackhoff) was just a young girl when she watched her mother kill her father in cold blood. As a result, Suzanne grew up fascinated by the mechanics of the human mind. Years later, she's turned that fascination into a successful career in psychology. An esteemed professor, Suzanne is in the midst of giving a lecture when gun shots ring out. In the process of evacuating her students, Suzanne finds that one of them has been badly wounded. Meanwhile, with the school on lockdown, Suzanne's boyfriend Logan schemes to get inside with the help of Police Lieutenant Michael Olsen. What Logan and Lieutenant Olsen have failed to realize, however, is that the gunman is a former student of Suzanne's named Connor who's grown dangerously obsessed with her. Now the only way for Suzanne to stop Logan is to confront him directly, but should she make one false move, the situation could quickly become a bloodbath. ~ Jason Buchanan, Rovi

Critic Reviews for A Deadly Obsession

There are no critic reviews yet for A Deadly Obsession. Keep checking Rotten Tomatoes for updates!

Audience Reviews for A Deadly Obsession

There are no featured audience reviews for A Deadly Obsession at this time.