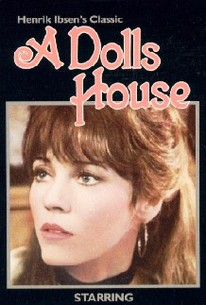 This Joseph Losey-directed 1973 version of Henrik Ibsen's A Doll's House marks one of two cinematizations of the story released during the same year. Here, Jane Fonda plays Nora Helmer, the mousy Norwegian wife who eventually turns on her insensitive husband Torvald (David Warner). At the time of its release, A Doll's House was castigated for allowing Ms. Fonda to espouse her "feminist dogma" in the role. In truth, what Losey and Fonda give us is not the traditional mindless "hothouse rose" who finally comes to her senses in Act Three, but instead a woman who knows she is trapped in a stereotype, but is willing to play along as long as her husband loves and trusts her. Only when Torvald proves to be a thick-headed jerk by condescendingly forgiving his wife for entering into a potentially scandalous but household-saving financial arrangement, does Nora reject his values and slam the door on him. Trevor Howard plays the slimy Dr. Rank, who assumes that his monetary hold over Nora grants him certain intimate privileges. A Doll's House was exquisitely photographed on location in Norway by Gerry Fisher.

Critic Reviews for A Doll's House

Audience Reviews for A Doll's House

There are no featured audience reviews for A Doll's House at this time.