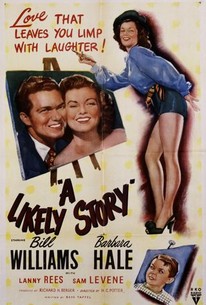 Soon to be married in real life, Barbara Hale and Bill Williams also played sweethearts on screen in the frantic farce A Likely Story. After a routine medical examination, ex-GI Bill Baker (Bill Williams) overhears a conversation between two doctors, leading him to the mistaken conclusion that he's doomed to die from a rare heart condition. Chancing to meet aspiring artist Vickie North (Barbara Hale), Baker resolves to help Vickie realize her dream by bankrolling her career. He takes out a huge life insurance policy, then talks a couple of gangsters (Sam Levene and Nestor Paiva) into bumping him off so that Vickie and her kid brother Jamie (Lanny Rees) can collect immediately. Things get complicated when Baker discovers that he's as hale and hearty as the next fellow, prompting him to try to weasel out of his bargain with the gangsters-who, having financed the insurance policy in the first place, aren't inclined to let our hero off the hook so easily. Curiously, what should have been a frothy comedy plays more like a film noir, complete with a brief, hallucinatory nightmare sequence! ~ Hal Erickson, Rovi

Nancy Saunders
as Blonde on Train

Jack Rice
as Secretary to Senator

Lee Phelps
as Cop at Intersection

William Self
as Intern
View All

Critic Reviews for A Likely Story

There are no critic reviews yet for A Likely Story. Keep checking Rotten Tomatoes for updates!

Audience Reviews for A Likely Story

There are no featured audience reviews for A Likely Story at this time.