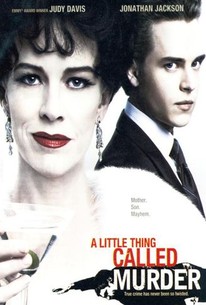 This true-crime biopic explores the life of mother-and-son grifters Sante and Kenny Kimes, from Kenny's childhood apprenticeship in early-'80s Honolulu to Sante's murder trial in late-'90s New York City. Fortyish Sante Kimes (Judy Davis) uses her looks and her brazen disregard for the law to acquire whatever she wants in life, from jewels to cars to large insurance settlements. Her most frequent accomplice in these endeavors? Son Kenny (former General Hospital actor Jonathan Jackson), who spends most of his childhood serving as a bit player, then later a co-star, in his mother's schemes. When a slavery -- yes, slavery -- conviction sends Sante to prison, Kenny enjoys a more or less normal adolescence with his wealthy father (Chelcie Ross), who has long refused to marry Sante. But upon her return from the big house, the now over-the-hill Sante re-enlists her son's assistance in her amoral activities. Eventually fingered for the murder of a wealthy Manhattan matron, Sante finds herself in court, where her son's testimony may well end her lifelong crime spree once and for all. Adapted by Randy Stone and Teena Booth from Jeanne King's book Dead End: The Crime Story of the Decade: Murder, Incest and High-Tech Thievery, A Little Thing Called Murder premiered January 23, 2006, on the Lifetime cable network. It was actually the second TV movie to explore the Kimes' story, following Mary Tyler Moore's turn in the 2001 CBS offering Like Mother, Like Son: The Strange Story of Sante and Kenny Kimes.

Brent King
as Kent at 18

Jake D. Smith
as Kenny at 6

Suzie Payne
as Kate
View All

There are no critic reviews yet for A Little Thing Called Murder. Keep checking Rotten Tomatoes for updates!

There are no featured audience reviews for A Little Thing Called Murder at this time.