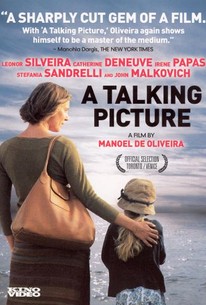 A Talking Picture occasionally struggles to engagingly convey its ambitious themes, but viewers attuned to its distinctive frequencies will find it well worth a watch.

This delicate and haunting fable from elder statesman of Portuguese filmmaking Manoel de Oliveira has been intepreted in many quarters as the director's response to the violence and brutality of September 11th; it also functions a poignant reflection on the birth and death of civilization. The film begins aboard a cruise ship that departs from Lisbon and is heading to Bombay, India, with many stops along the way. On board are Rosa Maria (Leonor Silveira) and daughter Maria Joana (Filipa de Almedia). As the tourists travel from county to country, Rosa Maria talks to her daughter about the myths and culture of various civilizations; stops include the Sphinx, the Acropolis, Istanbul and many other locales. Tourists board in several locations - many played by celebrities including Irene Papas, Catherine Deneuve, and Stefania Sandrelli - and they engage in lengthy, cultured, super-intellectual discussions with one another aboard the boat, mostly about the birth of civilization and the violence that must accompany it. In these discussions, each individual speaks to the others in his or her native language, sans any difficulty of understanding from the others. Then, a darker truth about the nature of the ship itself emerges, and sets the film up for an unexpectedly horrifying ending. A Talking Picture was shown in competition at the 2003 Venice Film Festival.