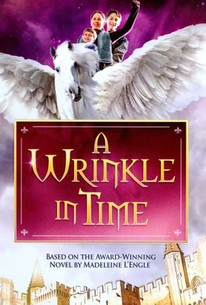 A Wrinkle in Time Videos

2:23
A Wrinkle in Time: International Trailer 1
View All Videos (1)

A Wrinkle in Time Photos

A pair of misfit siblings travel across time and space to save their father from enslavement in this made-for-TV adaptation of the classic children's novel by Madeleine L'Engle. Meg Murry (Katie Stuart), a tomboy who fits in with neither the kids nor the teachers at her New England middle school, feels bereft when her scientist father vanishes, leading to unsavory speculation from small-town gossips. But thanks to Charles Wallace (David Dorfman), her gifted but idiosyncratic younger brother, Meg befriends Mrs. Who (Alison Elliott), Mrs. Whatsit (Alfre Woodard), and Mrs. Which (Kate Nelligan) -- three cosmic beings who lead Meg, Charles Wallace, and their friend Calvin O'Keefe (Gregory Smith) on a journey to the sinister planet Camazotz, where Dr. Murry (Chris Potter) has been captured by the coercive power known as IT. Afflicted by hubris and naïveté, young Charles Wallace falls under IT's thrall, forcing Meg, Calvin, and their allies on a dangerous flight across time and space. But thanks to the healing touch of a kindly monster known as Aunt Beast (Ellen Dubin), Meg is able to face her own insecurities and attempt a final rescue of her loved ones. Originally broadcast May 10, 2004, on ABC, A Wrinkle in Time was released as an installment of the long-running Wonderful World of Disney.

Kate Nelligan
as Mrs. Which

Alison Elliott
as Mrs. Who

Kyle Secor
as The Prime Coordinator

Critic Reviews for A Wrinkle in Time

Audience Reviews for A Wrinkle in Time

A Wrinkle in Time Quotes