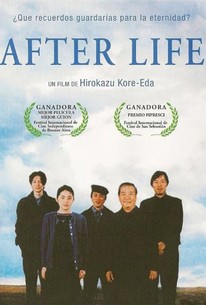 After Life is an offbeat and tender exploration of memory, love, and life after death.

Like his previous drama Maborosi (1995), Hirokazu Kore-eda's After Life is a brilliant meditation on death and memory. The premise of After Life is simple: over the span of a week, twenty-two souls arrive at a way station (which looks like an old junior high school) between life and death, where they are asked to choose just one memory to take into the afterlife. The new arrivals include an elderly woman, a rebellious dropout, a teenage girl, and a 70-year-old war veteran. Once they have chosen a memory, it is recreated and filmed by the staff of the way station, using all the tricks and illusions of cinema: cotton balls are used to mimic clouds, a fan is used for a summer breeze. In preparation for this project, Kore-eda interviewed 500 people from all walks of life about their memories. The film freely cuts between footage of these interviews, actors improvising, and actors reading scripts. Just as Kore-eda fuses documentary elements with a fictional narrative, we see over the course of the film how memories are distorted, improved on, and revised; and it is these subjectively constructed memories that the new arrivals value most. This film is not a typical Hollywood feel-good film; but its unhurried pace and lack of melodrama, like its subject, may linger in the memory long afterwards. ~ Jonathan Crow, Rovi