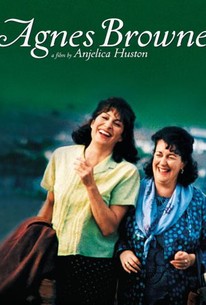 Actress Anjelica Huston directed and stars in this drama based on Brendan O'Carroll's novel The Mammy. Set in Dublin in 1967, Agnes Browne (Anjelica Huston) is the mother of seven children, barely making ends meet when her husband dies, leaving her to figure out not only how to support the family, but also how to pay for a funeral. To cover the burial expenses, Agnes resorts to borrowing money from a loan shark (Ray Winstone) who isn't interested in special deals for widows or orphans. Agnes learns to scrape up a living selling fruit and vegetables, and makes sure her children get the best education possible, but self-sacrificing Agnes would like one small luxury for herself: Tom Jones will be playing a concert in town soon, and she'd like nothing more than to hear the man sing "It's Not Unusual" live and in person. A French baker with eyes for Agnes (Arno Chevrier) joins forces with her children to see that she gets her wish. Agnes Browne boasts an accurate portrayal of Ireland in the late 1960s, thanks in part to the fact that Huston spent a great deal of time there as a child; the film was shown as part of the Directors Fortnight series at the 1999 Cannes Film Festival.

Tom Jones
as Himself

Jennifer Gibney
as Winnie the Mackerel

Brendan O'Carroll
as Seamus the Drunk

Richie Walker
as Jacko the Box

Sean Fox
as Liam the Sweeper

Pauline McCreery
as Woman in market

Chrissie McCreery
as Woman in market

Virginia Cole
as Woman with jumpers

Joanne Sloane
as The Widow Clarke

Buster
as Sparticus the dog

Peter Dix
as Man in pub

Anna Megan
as Woman in Pub

Anne Bushnell
as Singer in Restaurant

Doreen Keogh
as Nun in mortuary

Sandra Corbally
as Nurse in mortuary

Maria Hayden
as Receptionist At The Shelbourne Hotel

Peter Adaus
as Member of the Tom Jones Band

Ian Thompson (V)
as Member of the Tom Jones Band

Keith Airey
as Member of the Tom Jones Band

Steve Pearce
as Member of the Tom Jones Band