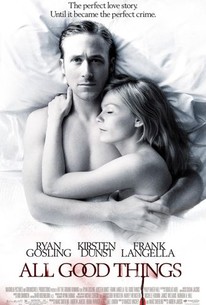 It's well-acted, and the true story that inspired it offers plenty of drama -- which is why it's so frustrating that All Good Things is so clichéd and frustratingly ambiguous.

Inspired by the most notorious missing person's case in New York history, ALL GOOD THINGS is a love story and murder mystery set against the backdrop of a New York real estate dynasty in the 1980s. Produced and directed by Andrew Jarecki (director of the Academy Award-nominated doc Capturing the Friedmans and producer of Catfish), the film was inspired by the story of Robert Durst, scion of the wealthy Durst family. Mr. Durst was suspected but never tried for killing his wife Kathie who disappeared in 1982 and was never found. The film stars Ryan Gosling, Kirsten Dunst and Frank Langella as the powerful patriarch, and captures the emotion and complexion of this real-life unsolved mystery. -- (C) Magnolia

Julie Moran
as Herself

Lola Pashalinski
as Woman at Luxor

Jerry Grayson
as Man at Luxor

Peter Becerra
as Officer at Search

Mary A. Kelly
as Vermont Realtor

Jeong Kim
as Waiter at Disco

Ruel Jusi
as Butler
View All

News & Interviews for All Good Things

Critic Reviews for All Good Things

Audience Reviews for All Good Things