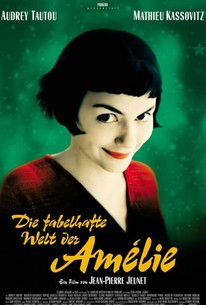 The feel-good Amelie is a lively, fanciful charmer, showcasing Audrey Tautou as its delightful heroine.

One woman decides to change the world by changing the lives of the people she knows in this charming and romantic comic fantasy from director Jean-Pierre Jeunet. Amelie (Audrey Tautou) is a young woman who had a decidedly unusual childhood; misdiagnosed with an unusual heart condition, Amelie didn't attend school with other children, but spent most of her time in her room, where she developed a keen imagination and an active fantasy life. Her mother Amandine (Lorella Cravotta) died in a freak accident when Amelie was eight, and her father Raphael (Rufus) had limited contact with her, since his presence seemed to throw her heart into high gear. Despite all this, Amelie has grown into a healthy and beautiful young woman who works in a cafe and has a whimsical, romantic nature. When Princess Diana dies in a car wreck in the summer of 1997, Amelie is reminded that life can be fleeting and she decides it's time for her to intervene in the lives of those around her, hoping to bring a bit of happiness to her neighbors and the regulars at the cafe. Amelie starts by bringing together two lonely people -- Georgette (Isabelle Nanty), a tobacconist with a severe case of hypochondria, and Joseph (Dominique Pinon), an especially ill-tempered customer. When Amelie finds a box of old toys in her apartment, she returns them to their former owner, Mr. Bretodeau (Maurice Benichou), sending him on a reverie of childhood. Amelie befriends Dufayel (Serge Merlin), an elderly artist living nearby whose bones are so brittle, thanks to a rare disease, that everything in his flat must be padded for his protection. And Amelie decides someone has to step into the life of Nino (Mathieu Kassovitz), a lonely adult video store clerk and part-time carnival spook-show ghost who collects pictures left behind at photo booths around Paris. Le Fabuleux Destin D'Amelie Poulain received unusually enthusiastic advance reviews prior to its French premiere in the spring of 2001, and was well received at a special free screening at that year's Cannes Film Festival. ~ Mark Deming, Rovi

Amaury Babault
as Nino (as a child)

Thierry Gebault
as The Endive Client