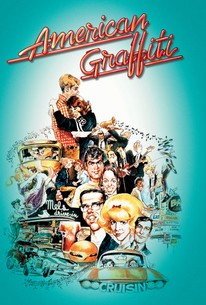 One of the most influential of all teen films, American Graffiti is a funny, nostalgic, and bittersweet look at a group of recent high school grads' last days of innocence.

2:06
American Graffiti: Official Clip - This Is My Cousin, Carol

1:32
American Graffiti: Official Clip - The Most Perfect Dazzling Creature Ever

2:44
American Graffiti: Official Clip - Must Be Your Mama's Car

This Academy Award-nominated classic, voted one of the American Film Institute's top 100 Films Of All Time, features the coming of age of four teenagers on their last summer night before college. Rediscover drag racing, Inspiration Point and drive-ins all over again in this nostalgic look back at the early '60s. The incredible soundtrack brings you the most memorable rock 'n' roll hits of the era. Directed by George Lucas and produced by Francis Ford Coppola, this classic stars Harrison Ford, Richard Dreyfuss, Ron Howard, Suzanne Somers, Cindy Williams, Wolfman Jack and Mackenzie Phillips. Capture the heart of America's last age of innocence with American Graffiti.

Suzanne Somers
as Blonde in T-Bird

Charles Dorsett
as Man at Accident

Jody Carlson
as Girl in Studebaker

Lisa Herman
as Girl in Dodge

Chuck Dorsett
as Man at Accident

Stephen Knox
as Kid at Accident

Herby and the Heartbeats
as Rock Band

Charles A. Murphy
as Old Man

Albert Nalbandian
as Hank
View All