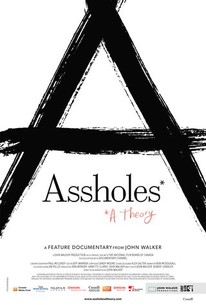 With venomous social media, resurgent authoritarianism and rampant narcissism threatening to trash civilization as we know it, the time has come for Assholes: A Theory - an entertaining and oh so timely feature doc from acclaimed director John Walker. Inspired by Aaron James' New York Times bestseller of the same name, Assholes investigates the breeding grounds of contemporary 'asshole culture' - and locates signs of civility in an otherwise rude-n-nasty universe. Venturing into predominantly male domain, Walker moves from Ivy League frat clubs to the bratty princedoms of Silicon Valley and bear pits of international finance. Why do assholes thrive in certain environments? What explains their perverse appeal? And how do they keep getting elected! Lively commentary is provided by the likes of actor John Cleese, former RCMP officer Sherry Lee Benson-Podolchuk, and Italian LGBTQ activist Vladimir Luxuria who famously locked horns with Silvio Berlusconi, the p****y-grabbing prototype of the 21st century demagogue.

Critic Reviews for Assholes: A Theory

Audience Reviews for Assholes: A Theory

There are no featured audience reviews for Assholes: A Theory at this time.