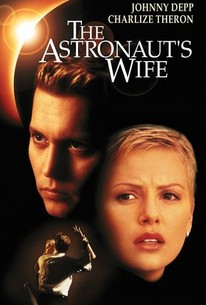 Despite the best efforts of its talented leads, The Astronaut's Wife moves at a snail's pace and fails to generate enough intrigue to keep viewers engaged.

Science fiction blends with domestic horror in this thriller. Spencer Armacost (Johnny Depp) is an astronaut on a routine mission in space when something goes horribly wrong and it looks as if he's doomed. However, Spencer is rescued at the last moment and returns to earth a hero. He soon announces that he's retiring from space exploration to spend more time with his wife Jillian (Charlize Theron). Jillian has suffered from depression in the past and would like to start a family, so she's initially thrilled with Spencer's decision. Jillian soon finds herself pregnant, but she starts to notice something odd about her husband, as if the man who returned isn't quite the same person who went away. As her pregnancy advances, Jillian's anxieties increase, but has something really happened to Spencer, or have Jillian's old demons merely resurfaced? The Astronaut's Wife marked the directorial debut of Rand Ravich, who previously penned screenplays for such films as The Maker and Candyman: Farewell to the Flesh.

Timothy Wicker
as Wide-Eyed Kid No. 1

Michael Luceri
as Waiter at Party

Dylan Sprouse
as Twin
View All

News & Interviews for The Astronaut's Wife

Critic Reviews for The Astronaut's Wife

Audience Reviews for The Astronaut's Wife