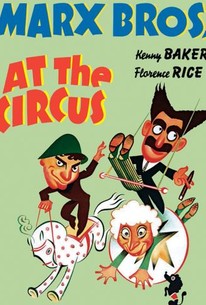 At the Circus Ratings & Reviews Explanation

At the Circus Photos

A distinct letdown from their previous MGM films, the Marx Bros.' At the Circus nonetheless contains intermittent moments of high hilarity. When Jeff Wilson (Kenny Baker) is in danger of losing his circus to crooked creditor Carter (James Burke), Jeff's faithful roustabout Antonio (Chico Marx) enlists the aid of seedy attorney J. Cheever Loophole (Groucho Marx). Despite the best efforts of Loophole, Antonio and general hanger-on Punchy (Harpo Marx), Jeff is robbed of the circus payroll by two flies in the ointment, Goliath the Strong Man (Nat Pendleton) and Little Professor Atom (Jerry Marenghi, later known as Jerry Maren). Also in on the plot to wrest control of the circus is aerialist Peerless Pauline (Eve Arden), with whom Loophole has a cozy tete-a-tete while walking on the ceiling (no kidding!) In a last-ditch effort to raise the necessary funds, Loophole romances Jeff's wealthy aunt Mrs. Dukesbury (Margaret Dumont). The finale takes place at a fancy society party at the Dukesbury mansion, with Punchy and Antonio hijacking the scheduled entertainment and replacing it with a full-fledged circus performance. Weighed down by an excess of plot and a surfeit of misfire gags, not to mention one of sappiest romantic subplots in film history (involving sappy tenor Kenny Baker and sappier ingenue Florence Rice), At the Circus still keeps audiences happy with Groucho's rendition of the deathless "Lydia the Tatooed Lady" (by Harold Arlen and E. Y. Harburg) and the zany denoument, wherein pompous conductor Fritz Feld and his orchestra are set adrift in the middle of the ocean and the magnificent Margaret Dumont is shot out of a cannon. Best gag: When Eve Arden stuffs the circus payroll into her blouse, Groucho turns to the camera and whispers "There must be some way of getting that money back without offending the Hays Office."

The Marx Brothers
View All

Critic Reviews for At the Circus

Audience Reviews for At the Circus

At the Circus Quotes