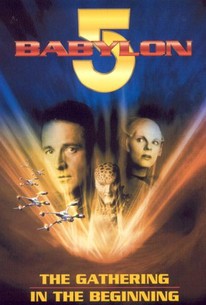 This two-part pilot episode for Babylon 5 was originally telecast as a single two-hour TV movie on February 22, 1993 (the "official" release date of March 8 refers to the film's Chicago TV premiere). Like the subsequent series, "The Gathering" takes place in the 23rd century, and was set on Babylon 5, a space station hovering in neutral territory which is used as a center of trade and diplomacy for a wide variety of friendly and hostile planets. As the space station becomes fully operational, the crew must deal with the attempting poisoning of Vorlan ambassador Kosh Naranek, for which B5 commander Jeffrey Sinclair is being held responsible. Complicating matters is the refusal of the Vorlans to allow any medical treatment for their ambassador. Written by series producer-creator J. Michael Straczynski, "The Gathering" features several actors who were supposed to have played recurring characters, but for various reasons were written out of the weekly version: Tamlyn Tomita as Lt. Cmdr. Laurel Takamisha, Blaire Baron as Caroline Sykes, Johnny Sekka as Dr. Benjamin Kyle and Patricia Tallman as Lyta Alexander. The pilot won an Emmy Award for special effects, and a Hugo nomation for "Best Dramatic Presentation" -- this in spite of almost universal damnation from mainstream TV critics. On January 4, 1998, the TNT cable network offered a re-edited version of "The Gathering", with a new musical score by Christopher Frake (replacing the one composed by Stewart Copeland), a handful of new computer-generated special effects, a number of judicious cuts, and several previously excised sequences, including a lengthy hostage-crisis subplot.

Ed Wasser
as Guerra
View All

Critic Reviews for Babylon 5: The Gathering

Audience Reviews for Babylon 5: The Gathering

There are no featured audience reviews for Babylon 5: The Gathering at this time.