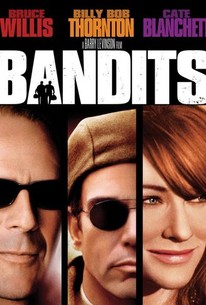 The story may not warrant its lengthy running time, but the cast of Bandits makes it an enjoyable ride.

Director Barry Levinson follows up the low-budget An Everlasting Piece (2000) with another comedy, this one of the homegrown variety from former Twin Peaks (1990) TV series writer Harley Peyton. Bruce Willis stars as suave bank robber Joe, who has escaped from prison with his hypochondriac buddy Terry (Billy Bob Thornton). Together, the two men have devised a clever scheme to take a bank officer hostage the night before a heist, then simply escort the executive to work early the next morning when they clean out the vault. Their ingenious methods have led to the men becoming media darlings dubbed "the Sleepover Bandits," but all Joe and Terry want is to make a nice pile of money before crossing the Mexican border to a life of freedom and legitimacy. Their quest gets more complicated when Terry is struck by a car driven by Kate Wheeler (Cate Blanchett), a bored housewife who's then forced to join their crime spree. Soon both Joe and Terry are in love with Kate and she with them, realizing that the two friends put together pretty much equal the perfect man. Bandits co-stars Troy Garity, son of actress Jane Fonda. ~ Karl Williams, Rovi

Cindy Goldfield
as Debbie Day No.1

Heather Mathieson
as Debbie Day No. 2

Erin-Kate Whitcomb
as Debbie Day No. 3

Greg Wilmarth
as US Marshall