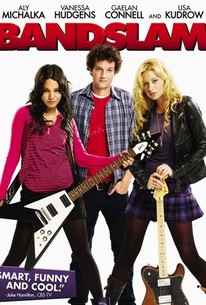 Bandslam is an intelligent teen film that avoids teen film cliches, in an entertaining package of music and coming-of-age drama.

A gifted young singer-songwriter recruits the new kid in town to manage her fledgling rock band in this music-driven comedy starring Vanessa Anne Hudgens and Gaelan Connell. Charlotte Banks (Aly Michalka) has what it takes to be a true rock star, and with the battle of the bands approaching she's determined to win. Her chief opponent in the upcoming competition is none other than her egotistical ex-boyfriend Ben (Scott Porter). Ben may be cocky, but there's no denying his charisma when he takes the stage. With a little help from new arrival Will Burton (Connell), Charlotte's band begins to develop a unique sound and starts writing some original songs. Meanwhile, as Will and singer/guitarist Sa5m (Hudgeons) start to make a love connection, disaster strikes, and the band is forced to choose between conceding the competition or standing tall and finally living up to their true potential.

Gaelan Connell
as Will Burton

David Bowie
as Himself

Ryan Ciardo
as Kid at Lunch in Cincinnati

Will Greenazur-De Johnson
as Scott Donnelly

Evan Butts
as The Daze Guitar/Vocals

Chris Ritchie
as The Daze Bass

Aaron Lemke
as The Daze Drummer