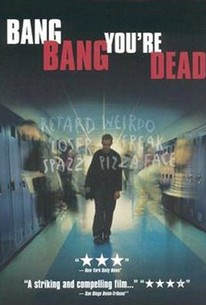 Inspired by a play that has been presented dozens of times to middle- and high-school students throughout the United States, Bang, Bang, You're Dead ponders the possible reasons that outwardly "normal" teenagers periodically resort to Columbine-style violence. The focus here is on Trevor Adams (Ben Foster), an intelligent but hypersensitive high schooler whose troubled past has designated him "at risk." Feeling persecuted by those stronger and more popular than himself, Trevor has already run afoul of classmates and teachers alike by making death threats against the school football team. Now he has aligned himself with a group of fellow "outsiders" who call themselves the Trogs. Indulging in prankery that runs the gamut from merely irritating to potentially dangerous, Trevor and the Trogs plan an all-out deadly assault against their so-called enemies. Although the script points out that peer pressure and bullying has gone beyond the point of harmlessness in today's society, it is careful not to blame any one person or group for what ultimately happens to Trevor; even Trevor himself is shown to be comprised of equal parts villain and victim. First screened at the Seattle International Film Festival, Bang, Bang, You're Dead formally premiered October 13, 2002, over the Showtime cable network.

Elana Nep
as Cheerleader #1
View All