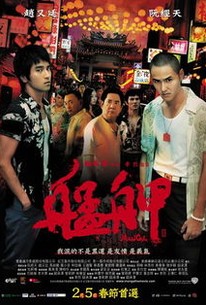 A delinquent becomes a full-fledged criminal as Taipei's underworld explodes in this drama from Taiwanese director Doze Niu. In the 1980s, Mosquito (Mark Chao) was seventeen years old when his family moved to the rough and tumble Monga district of Taipei. As the new kid at school, Mosquito was frequently harassed by bullies until he struck up a friendship with Dragon (Rhydian Vaughan), a tough kid whose father, Geta (Ma Ju-lung), was a local mobster. Mosquito and Dragon form a gang, "The Gang of Princes," and their swaggering style and willingness to fight makes them big fish in their school's small pond. But a bloody run in with rival gang banger Dog Boy (Chen Han-tien) gives the boys an education in the consequences of the gangster's life, and Geta tries to teach the boys about the necessities and realities of life outside the law. Mosquito and Dragon are not easily dissuaded, and after graduating from school the Gang Of Princes take their place in Monga's organized crime community. But the violence and chaos of life on Taipei's streets is ramped up to new heights when crime boss Gray Wolf (Doze Niu) launches a turf war to take control of the territory. Mengjia (aka Monga) was an official selection at the 2010 Berlin International Film Festival.

There are no critic reviews yet for Bang-kah (Monga). Keep checking Rotten Tomatoes for updates!