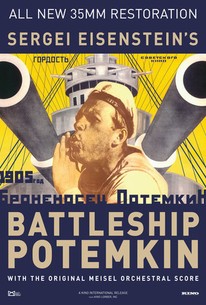 A technical masterpiece, Battleship Potemkin is Soviet cinema at its finest, and its montage editing techniques remain influential to this day.

After the success of Strike (1924), Sergei Eisenstein was commissioned by the Soviet government to make a film commemorating the uprising of 1905. Eisenstein's scenario, boiled down from what was to have been a multipart epic of the occasion, focussed on the crew of the battleship Potemkin. Fed up with the extreme cruelties of their officers and their maggot-ridden meat rations, the sailors stage a violent mutiny. This, in turn, sparks an abortive citizens' revolt against the Czarist regime. The film's centerpiece is staged on the Odessa Steps, where in 1905 the Czar's Cossacks methodically shot down rioters and innocent bystanders alike. To Eisenstein, this single bloody incident was the crucible of the successful 1917 Bolshevik revolution, and the result was the "Odessa Steps sequence," which is often considered the most famous sequence ever filmed; it is certainly one of the most imitated, perhaps most overtly by Brian De Palma in The Untouchables (1987). This triumph of Eisenstein's "rhythmic editing" technique occurs in the middle of film, not as the climax, as more current film structure might do it. All the actors in the film were amateurs, selected by Eisenstein because of their "rightness" as types for their roles. Pictorial quality varies from print to print, but even in a duped-down version, Battleship Potemkin is must-see cinema. ~ Hal Erickson, Rovi

Repnikova
as Woman on Steps

Andrei Fait
as Officer on Piano

Citizens of Odessa
as Themselves

Yulia Eisenstein
as Lady Bringing Forth Fruit to Mutineers

A. Glauberman
as Aba

Members of the Proletcult Theatre

Sailors of the Red Navy
as Themselves

Members of the Proletcult Theater
View All