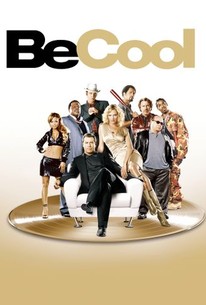 Be Cool is tepid, square, and lukewarm; as a parody of the music business, it has two left feet.

Be Cool: Official Clip - Bring It On Monologue

Underworld hipster Chili Palmer is back in the entertainment business in this sequel to the 1995 hit Get Shorty, which like the first film is based on a novel by Elmore Leonard. Gangster-turned-movie producer Chili (once again played by John Travolta) has grown tired of the screen trade, especially after his latest project turned out to be a box-office flop. Chili is looking for new horizons and thinks he may have found his niche when his close friend Tommy Athens (James Woods), a fellow mobster who runs an independent record label, is murdered by Russian gangsters. Chili takes over Athens' record company, Nothing to Lose Records, and begins courting Tommy's girlfriend, Edie (Uma Thurman). Edie is an experienced hand in record production, and together she and Chili spot what would seem to be the ideal act for their label -- Linda Moon (Christina Milian), a beautiful young woman with a powerhouse voice. Linda is stuck, however, in a going-nowhere R&B trio managed by the monumentally sleazy Raji (Vince Vaughn). Chili isn't much concerned about Linda's contract with Raji, but Raji certainly is, and the manager soon takes out a contract on Chili with the same Russian hoods who killed Tommy. Soon Chili is facing all the action he can handle between the Russian gunmen, a music mogul named Nick Carr (Harvey Keitel) who wants Chili to stay out of the business, and Sin LaSalle (Cedric the Entertainer), a successful hip-hop producer who wants Chili to pay him the 300,000 dollars he is owed by Tommy. Be Cool also features appearances by The Rock as a gay Samoan bodyguard, Andre Benjamin (aka Andre 3000 from the hip-hop duo Outkast) as a rapper who isn't very good with a gun, and Aerosmith frontman Steven Tyler as himself.

Cedric the Entertainer
as Sin LaSalle

Steven Tyler
as Himself

Wyclef Jean
as Himself

Sergio Mendes
as Himself

Gene Simmons
as Himself

Joe Perry
as Himself

Anna Nicole Smith
as Herself
View All

News & Interviews for Be Cool

Critic Reviews for Be Cool

Audience Reviews for Be Cool