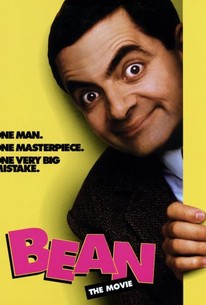 One of Britain's most popular, comical television characters, the taciturn, child-like, clumsy, conniving and ever ingenious Mr. Bean (Rowan "Black Adder" Atkinson) makes his big-screen debut in this riotous slapstick comedy. A creation of Atkinson and writers Richard Curtis and Robin Driscoll, Mr. Bean started out in a half-hour television series around 1990; since then his show has become one of the highest rated comedies on British television and has gained an international cult following. With a style reminiscent of the great silent comedians, Bean is an average, albeit eccentric, Joe with a knack for turning the most innocuous situations into full-blown disasters. Whereas the television shows are nearly silent, Mr. Bean has a lot more dialog in the film. The film begins at the dawn of a typical day with Bean shaving his whole face, including his tongue. After a quick cup of coffee, he heads off for his job as guard/caretaker at the Royal National Gallery where he is supposed to prevent visitors from touching the artwork. Instead, Bean spends most of his time sleeping. His supervisors try to fire him, but a board member (John Mills) intervenes and saves his job. To get rid of him, Bean's bosses conspire to send him to a posh Los Angeles private art gallery where as an "art scholar" he will deliver a speech to commemorate the return of "Whistler's Mother" which was purchased by Army General Newton (Burt Reynolds) through a deal facilitated by the gallery owner George Grierson (Harris Yulin). Bean is to stay with the family of David Langley (Peter MacNicol), the gallery director. He isn't there long before he nearly destroys the place. His speech at the gallery is even more cataclysmic. To make matters worse, a series of mishaps leads Bean to be mistaken for a prominent surgeon and forced to perform emergency surgery on a police officer.