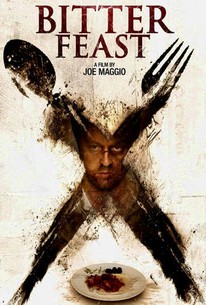 An angry foodie develops a taste for violence in this darkly witty thriller from writer and director Joe Maggio. Peter Grey (James Le Gros) is a chef who thinks he has what it takes to become a multi-media celebrity -- he runs a popular restaurant, he's the host of a cable television series called "The Feast," and he's in talks to design and endorse a line of high-end cookware. But while he knows food, Peter is also pompous, self-righteous and convinced he's smarter than everyone around him; Peter wants "The Feast" to carry a responsible environmental message, but his producer at the network (Mario Batali) just wants something that will attract viewers and advertisers, and pairs Peter with a pretty but thick-headed co-host, Peg (Megan Hilty). Peter is near the end of his rope when a well-known cuisine blogger, T.J. Franks (Joshua Leonard), gives his restaurant a scathing review, and soon "The Feast" is cancelled, the cookware company passes on its contract with Peter, and his restaurant closes due to bad business. Peter is certain Franks is to blame for this sudden flood of bad luck, and he kidnaps the blogger, determined to get some revenge, served bloody. Bitter Feast was an official selection at the 2010 Los Angeles Film Festival. ~ Mark Deming, Rovi

Sean Reid
as Co-Worker
View All