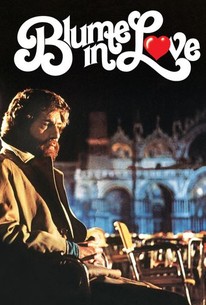 In the Los Angeles of yoga, therapy, and well-off liberals, a divorcé decides that his ex-wife is the love of his life in Paul Mazursky's romantic comedy. Beverly Hills divorce lawyer Stephen Blume (George Segal) becomes his own client when his social worker wife Nina (Susan Anspach) throws him out for sleeping with his secretary. Only then does Blume realize that he can't live without Nina, even though she seems fine without him, and he has a new sex partner in divorcée Arlene (Marsha Mason). So what does he do to win Nina back? Befriend her laid-back musician beau, Elmo (Kris Kristofferson), show up at her house with breakfast bagels, eavesdrop on her therapy sessions, and forcibly impregnate her, of course. Banished to their former honeymoon site in Venice, Italy while Nina thinks things over, Blume reflects on his past and his obsession, as he dreamily hopes for the best. Cutting between Blume's musings on love and loss in Venice's Piazza San Marco and the events in L.A. that brought him there, Mazursky humorously yet sharply dissects the complications of marriage in the let-it-all-hang-out Me Decade of the 1970s. Blume and Nina face the same dilemma as the couples in Mazursky's 1969 hit Bob & Carol & Ted & Alice: how to mesh traditional vows with the new freedom and its temptations. In this case, it takes a divorce to convince the solipsistic Blume that the woman he wants most is his own wife. Considered by some critics one of the decade's best interrogations of contemporary coupledom, Blume in Love astutely captured the absurdity of Blume's self-involved romantic quest, while slyly celebrating the operatic spirit of love that drives him.

Critic Reviews for Blume in Love

Audience Reviews for Blume in Love