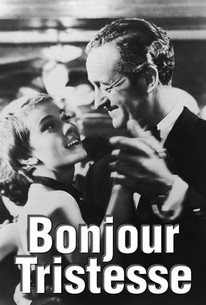 Francoise Sagan's bittersweet novel Bonjour Tristesse is given a sumptuous Riviera-filmed screen treatment. David Niven plays a wealthy playboy, the father of teenaged libertine-in-the-making Jean Seberg. Seberg tolerates most of her father's mistresses, but doesn't know what to make of the prudish Deborah Kerr, who will not cohabit with Niven until after they're married. Feeling that her own relation with her father will be disrupted by Kerr's presence, Seberg does her malicious best to break up the relationship--only to be beaten to the punch by Niven, who despite his promises of fidelity to Kerr cannot give up his hedonistic lifestyle. The combination of the daughter's disdain and the father's rakishness drive Kerr to suicide. Niven and Seberg continue pursuing their lavish but empty lifestyle, though both realize that their lack of moral fibre has destroyed a life. The incestuous undertones of the original Sagan novel are only slightly downplayed in the film version; the "tristesse" (sadness) is visually conveyed by filming the Deborah Kerr flashback scenes in color and the opening and closing of the film in bleak black and white. Bonjour Tristesse was codirected by Otto Preminger, who'd previously discovered Jean Seberg for his benighted 1957 filmization of Saint Joan.