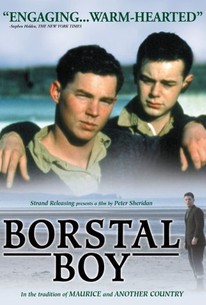 Critics Consensus: The sentimentality of Borstal Boy feels false in contrast to the gritty life of the actual Brendan Behan.

Critics Consensus: The sentimentality of Borstal Boy feels false in contrast to the gritty life of the actual Brendan Behan.

Critic Consensus: The sentimentality of Borstal Boy feels false in contrast to the gritty life of the actual Brendan Behan.

Brendan Behan's famous memoir about his troubled youth formed the basis of this drama. Brendan (Shawn Hatosy) is a 16-year-old boy from Ireland who loathes the British and is eager to do something about it. Brendan sails into Liverpool, but is discovered to be carrying the makings of a bomb; he's soon placed under arrest and thrown into a borstal (British reform school), where he finds himself surrounded by a collection of tough-as-nails English delinquents. While his political beliefs don't change, Brendan learns to become more tolerant of others as he makes friends with a few of his fellow inmates, including Charlie (Danny Dyer), who dreams of sailing away some day, and Scottish Jock (Robin Laing). Brendan also has to deal with the pains of first love when he becomes infatuated with Liz (Eva Birthistle), the daughter of the school's master (Michael York). Borstal Boy marked the film debut of stage director Peter Sheridan, the brother of noted Irish filmmaker Jim Sheridan.

Eoin Slattery
as James
View All

Dripping with cliche and bypassing no opportunity to trivialize the material.

Takes a clunky TV-movie approach to detailing a chapter in the life of the celebrated Irish playwright, poet and drinker.

A film that will probably please people already fascinated by Behan but leave everyone else yawning with admiration.

Serves as a powerful reminder that children have been willing to die for the hatred in which they've been schooled for a long time now.

Does anyone much think the central story of Brendan Behan is that he was a bisexual sweetheart before he took to drink?

Hatosy's Irish accent was way better than I expected.

A gentle and engrossing character study.

Sheridan had a wonderful account to work from, but, curiously, he waters it down, turning grit and vulnerability into light reading.

Hatosy establishes himself here not only as the bona fide star of this little ensemble film, but also as a talent to be watched.

The film is saved by its performances.

A very nice story of young Brendan Behan that shows love sometimes is found in unexpected places. As with any movie with WWII as a backdrop, there is not always a lot of sunshine, but the sweetness of youth is demonstrated.

I think the average fan of Danny Dyer, may be a little disappointed with this film as he doesn?t play his stereotypical type of role. Performance-wise, it was a good surprise that the Actor wasn?t typecast, however it lacked any major excitement.