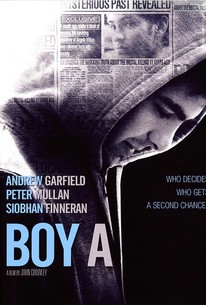 A man looking to shed his former identity in order to move beyond his traumatic past discovers that the past and the future are inexorably linked in director John Crowley's feature adaptation of a novel by author Jonathan Trigell. Terry (Peter Mullan) is a caseworker whose job it is to help people create new lives. His latest charge is a young man with a troubled past who eventually decides on the new name Jack (Andrew Garfield). Jack has decided to start a new life in Manchester, where no one is aware of his sordid history. As Jack begins his new job in a new town, he quickly catches the attention of beautiful co-worker Michelle (Katie Lyons). While Michelle's advances are unmistakable, Jack remains somewhat awkward in his new skin and the initial encounters between the pair are somewhat clumsy. Later, as the two new lovers begin experiencing the thrill of connecting with a kindred soul, Jack performs a heroic feat that finds him celebrated as a local hero, and it begins to look like he has successfully made the transition into his new life. ~ Jason Buchanan, Rovi

John Catterall
as Man in Club

News & Interviews for Boy A

Critics Consensus: File The X-Files Under “Disappointing”
View All

Critic Reviews for Boy A

Audience Reviews for Boy A