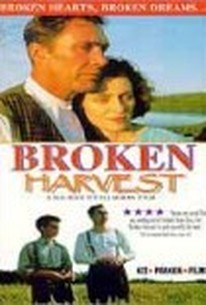 In this drama from Ireland, a man looks back at his youth in the 1950s, when he grew into manhood in the wake of the War of Independence. Jimmy (Darren McHugh) and his best friend Willie (Joe Jeffers) are fairly typical teenagers who like rock and roll, comic books, and Mary (Joy Florish), a girl they've known since childhood. But while their lives are carefree, their families have some serious issues to deal with. Jimmy's folks, Arthur (Colin Lane) and Catherine (Marian Quinn), inherited a large parcel of land, but this inheritance has managed to put them deeply in debt; Arthur also refuses to make peace with the British and hates them with a passion. In addition, Arthur has long fought with Willie's Uncle Josie (Niall O'Brien); many years ago, Josie was Catherine's boyfriend, and neither Josie nor Arthur is willing to forget it. The feud grows from animosity into violence when Josie accuses Willie of stealing money from the local church. Broken Harvest features sequences in both Gaelic and English. ~ Mark Deming, Rovi

There are no critic reviews yet for Broken Harvest. Keep checking Rotten Tomatoes for updates!

There are no featured audience reviews for Broken Harvest at this time.