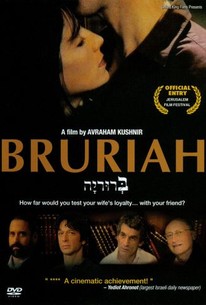 A modern day Jewish woman embarks on a quest for a controversial book written by her father on the subject of Bruriah in director Avraham Kushnir's mystery-infused drama. The intelligent and strong willed wife of a 2nd Century rabbi, Bruriah rallied against the prevailing belief that "women are light minded." In order to prove that the statement was true, Bruriah's husband Rabbi Meir assigned one of his students the task of seducing his wife. Later, after falling for the ruse and discovering it had all been arranged by her husband, Bruriah became consumed by shame, and took her own life. Flash forward to Jerusalem, 2008, where a woman with the same name still struggles with being excommunicated after her father penned a controversial tome on the legend of Bruriah. Disregarding her husband's repeated pleas not to do so, Bruriah embarks on an obsessive quest to track down the last existing copy of her father's book, and determines to revisit all of the compromises she made in the course of her life over the course of her mission. Meanwhile, her husband Yaacov grows weary of his wife's escapades, and sets out to teach Bruriah that Rabbi Meir's sentiments still hold true in the 21st Century. ~ Jason Buchanan, Rovi

There are no featured audience reviews for Bruriah at this time.